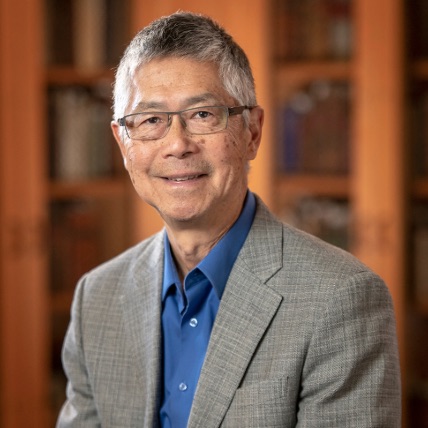 All Tigers are invited to an evening with Gordon Chang ’70. Gordon will discuss his latest book, “Ghosts of Gold Mountain: The Epic Story of the Chinese Who Built the Transcontinental Railroad.”

NOTES FROM THE EVENT (photos below)
Professor Gordon Chang ’70 provided a gripping account of the Chinese men’s lived experiences working for the Central Pacific Railroad. Over 20,000 overseas Southern Chinese men built the railroad tracks that connected Promontory Point, Utah with the Pacific Ocean. Sadly, nearly 10% of those brave men died while building these tracks. Gordon’s research and book brings to life this forgotten group of brave men who were essential in developing the West over 150 years ago.

Over 70 people attended. Included among the attendees was one of Gordon’s classmates, Bill Neidig ’70. Gordon and Bill were happy to see each other and both looked forward to their 50th Reunion next year.

Ghosts of Gold Mountain is a groundbreaking, breathtaking history of the Chinese workers who built the Transcontinental Railroad, helping to forge modern America only to disappear into the shadows of history.

All alumni, students, and family members are welcome!  Seating is limited.

“Gordon Chang leaves no boulder unturned, nor tunnel unexplored, as he brings vital detail to the lives of the Chinese railroad workers: ‘ghosts’ who are no longer missing in history, thanks to his meticulous research. After a hundred and fifty years, this book sets the record straight.” — Helen Zia, author of Last Boat out of Shanghai

“Ghosts of Gold Mountain is a treasure trove of stories, and of exciting scholarship that answers questions many of us have asked for decades. In this profound and inspiring book, Chang reveals at last how the West was truly won: by Railroad Chinese who literally united these American states.” — David Henry Hwang, author of the Tony Award-winning play M. Butterfly

“Gripping . . . Chang has accomplished the seemingly impossible . . . He has written a remarkably rich, human, and compelling story of the railroad Chinese.” — Peter Cozzens, Wall Street Journal

“The lived experience of the Railroad Chinese has long been elusive . . . Chang’s book is a moving effort to recover their stories and honor their indispensable contribution to the building of modern America.” — New York Times

All alumni, students, and their guests are welcome but seating is limited so please register early.

Gordon’s book will be available for purchase and signing.

Gordon Chang, who is the Olive H. Palmer Professor in Humanities, has been deeply involved in the betterment of undergraduate education at Stanford, including teaching courses within Introductory Seminars, Sophomore College, Stanford in Washington and the Haas Center for Public Service. He served on the Thinking Matters Governance Board, which is responsible for developing and overseeing the Thinking Matters curriculum.

Chang served as faculty-in-residence for the former Bing Overseas Studies program in Beijing. He has mentored many undergraduate researchers, including at the Center for Spatial and Textual Analysis, a pioneering research hub where participants apply digital tools and methods to create new knowledge in interdisciplinary humanistic inquiry.

Chang also served on the committee that considered the establishment of ethnic studies at Stanford, which resulted in the formation of the Interdepartmental Program in Comparative Studies in Race & Ethnicity, which offers undergraduates the opportunity to major or minor in Comparative Studies in Race & Ethnicity; Asian American Studies; Chicana/o, Latina/o Studies; Jewish Studies and Native American Studies.

Chang served as a founding director of the Asian American Studies program and as a director of the Center for East Asian Studies in the School of Humanities and Sciences. He served on faculty advisory groups for several interdisciplinary programs and was a resident fellow in Castaño, part of the Gerhard Casper Quad.

He is a member of the Faculty Senate, the centerpiece of academic governance at Stanford.

His research and teaching focus on historical connections between race and ethnicity in America with a particular focus on trans-Pacific relations, especially the interconnections between East Asia and America. This spring, he will be publishing two books on the history of Chinese railroad workers in North America: The Chinese and the Iron Road: Building the Transcontinental (Stanford University Press) and Ghosts of Gold Mountain: The Epic Story of the Chinese Who Built the Transcontinental (Houghton Mifflin Harcourt).

He pursues ongoing research in the fields of Asian American history, U.S. diplomacy, the Cold War, and U.S.-China relations past and present.

Chang received the Kahn-Van Slyke Award for Graduate Mentoring from the History Department in 2014. He received fellowships from the Guggenheim Foundation and the American Council of Learned Societies in 1999-2000, and from the Stanford Humanities Center in 1993-94, 2002-03 and 2010-2011.